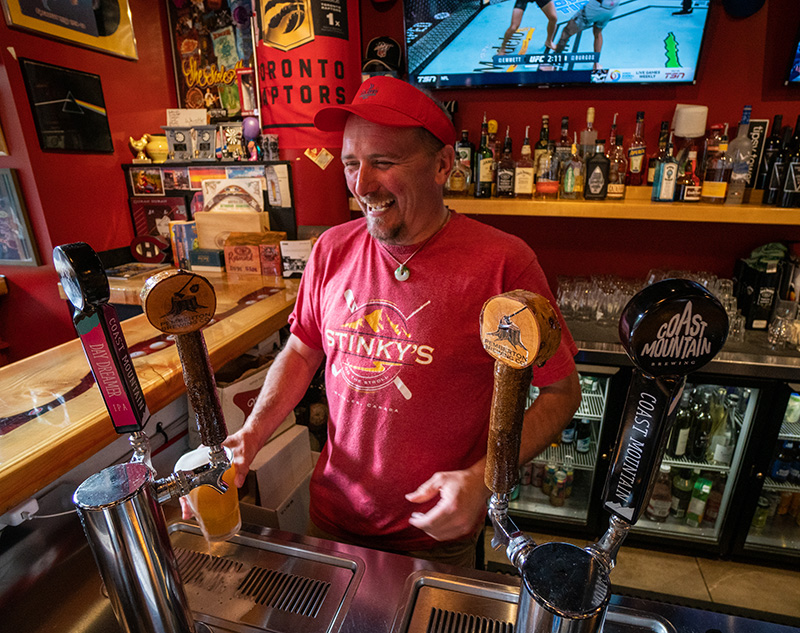 Stinky in the News

Jeremy “Stinky” Peterson is searching for Whistler’s soul—that old-school, down-to-earth, ski bum soul. It’s missing of late, he says, and he aims to nurture back to life. “I’m just a simple guy, trying to bring something back to locals,” he says, sitting in Whistler’s newest bar/restaurant, his own Stinky’s on the Stroll.

That’s not to say the new Stinky’s is exclusively for locals. Rather, it’s a place where tourists can go too and get a feel for the “real” Whistler. That authentic vibe is built right into the cozy bar; it’s in the skis and snowboards against the back wall, some of which come with their own local story, and it’s in the characters at the bar, chief of which is Stinky himself.

The Ottawa native arrived in Whistler at the start of the summer 24 years ago. The town was less than half its size and summer was nothing much to talk about. Peterson loved everything about it—the small town vibe, the tight-knit community, the absolute love for life in the mountains. And so began his storied journey in Whistler’s food and beverage sector, his first job as bagel chef at the now defunct Bagel Street Café, his most renowned job tending the bar at the legendary Citta’, also now closed. So, when Peterson had the chance at making a piece of Whistler his own, he grabbed it. That was just over a year ago and he hasn’t looked back since. “This bar is a little bit everything of me,” he says proudly, pointing to the Habs memorabilia on the walls, the Tragically Hip and Pink Floyd references throughout.

The food is simple at Stinky’s: “It’s hungover comfort food at a decent value,” explains Peterson.

But, what about that long-standing nickname? Peterson explains it comes from a character called Stinky Peterson on the Canadian sketch comedy The Red Green Show. And so, he has embraced it, made it his own—the Stinky Shuffle, for example, is his dance, and then there’s his own national holiday, Stinky de Mayo, held on the same day as the Mexican Cinco de Mayo.